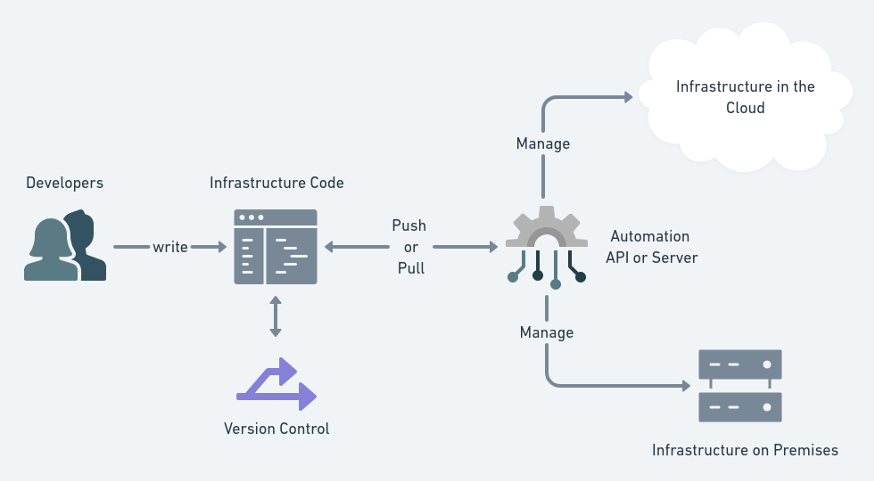 Infrastructure as code: What is it? Why is it important?

Let’s start by understanding how infrastructure was traditionally managed. Traditionally you would have an infrastructure team that would be assigned tasks that included creating virtual machines and any required underlying infrastructure to support them. This process was mostly manual, completed by an engineer accessing a management portal and using a point / click approach to deploy resources. Whilst this process worked well for on-premises infrastructure, which was mostly static, as we have transitioned to the Cloud and adopted a pay per minute model, it no longer makes sense.

Another compounding change is how software is developed. Software developers are moving away from building monolithic applications, which were well suited for virtual machines. Now they are adopting new technologies like containers to build microservices. The goal with microservices is to break an application down into small self-contained services that perform small tasks. An example of this would be at Facebook, deploying a microservice that is responsible for sending text messages to users. Instead of having this all on a single server, they would break out the part that runs text messaging and build this as a container. In the future, if they need to update the component, they can do so without taking down the whole platform and more importantly scale the task across multiple servers, datacentres, and even locations!

The ultimate result of this IAC is automation. Having our infrastructure provision using code allows us to automate an otherwise manual task. We can then use other data sources to define what infrastructure resources are required. During the day when a website is at its most busy, we might spin up more web servers, at night when the website is less busy, we will turn servers off to reduce cost. This elasticity allows us to get the best out of Cloud computing.

If you are looking to supercharge your Cloud capabilities whilst up-skilling your team give Next2IT a call, to see how we can help you unlock the true potential of Cloud computing today!

When it comes to managing IT for your business. You need an expert. Let us show you what responsive, reliable and accountable IT Support looks like in the world.

START WITH A FREE ASSESSMENT

39% of UK businesses identified a cyber attack in the last 12 months! Why is this figure so high?

Why consider a Cloud Migration?

Baas – Backup as a Service Explained

Google’s acquisition of Mandiant. What does it mean for Cyber security?

One thought on “Infrastructure as code: What is it? Why is it important?”

Speak with an Expert